State of the Union, a "Sputnik Moment"? I don't think so

I'll give the President a B+ for delivery, and a B for content. The President laid out some bold ideas about infrastructure and education, but in my opinion failed to hammer home enough the job-creating effects of things like high-speed rail and clean energy.

The problem is, when you have an opposition party that does not believe in science, and a Congress that is bought and paid for by the oil companies, how can you expect to get any of these measure through?

The "Sputnik moment" analogy was false. The space race was largely about political ideology; proving we were better than the Commies. Who's our opposition here? China? With the space race, there was a measurable, specific destination - the moon - and a definition of success - getting there.

How will we define success in today's "Sputnik moment"?

I was disappointed to hear only a passing mention of the wars in Iraq, and Afghanistan, the usual platitudes about supporting the troops and disabling al Qaeda, and beginning to bring the troops home in July. Why wait?

Finally, a word cloud, featuring the prominence and non-prominence of words used in the speech. Draw your own conclusions. 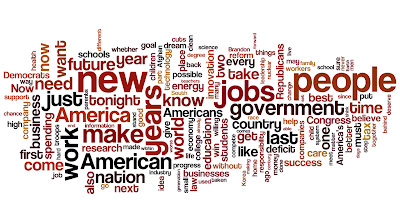 Posted by jeffpickens at 7:07 AM

I also think the "Sputnik" goal stretched out over 25 years is wishful thinking. How many administrations will we have that will want to tweak that goal over that time? Apollo went to the moon 9 years after JFK's speech.

While the concept is a good one, the goal is not as challenging as it could be. Apollo required technical skills for success; Obama's energy independence requires political will.

I would have preferred to see a more modest goal - like 50% clean energy - in a shorter time frame - say 9 years.

@deciminyan: You and I are of the boomer generation and "get" what Obama meant by a Sputnick moment. I wonder how many people under age 50 know or care.

I would like to have seen him borrow a phrase from JFK: "before this decade is out", rather than 25 years.