(thanks to deciminyan for tipping me off to this story)

As if it weren't bad enough that NJ lost another soldier in Afghanistan - U.S. Army Spc. Benjamin Moore, 23, of Bordentown, was one of three soldiers killed in an IED (improvised explosive device) attack in Afghanistan’s Ghazni province on Jan. 12.
Now comes the disturbing news that the Westboro Baptist Church is planning to protest Spc Moore's funeral in Bordentown, NJ this Saturday, January 22. Regardless of your religious or political beliefs or affiliations, no person on this planet, with the possible exception of members of the Phelps family, would be able to justify the despicable actions of these monsters.
If there can be any good news here, the community has mobilized and and is planning a non-violent demonstration to shield the family of Benjamin Moore from the presence of the WBC protesters.
The following is from the Facebook wall of William Brown, of Mt Laurel, one of the leaders of the protest:
"Hope I see you Saturday morning at 0800 at Trinity Church 300 block, Farnsworth Ave, Bordentown, NJ. Westboro Baptist church is planning one of their despicable protests at the funeral of Ben Moore, who passed away in Afghanistan last week. Let's join the non-violent blockade of that piece of crap who desecrates our heroes funerals and honor our brother Ben Moore and his family."
There is always the possibility that the Westboro Baptist Church is bluffing, or will change their minds and not make the trip to Bordentown.
But if they do, New Jersey will be ready and waiting. 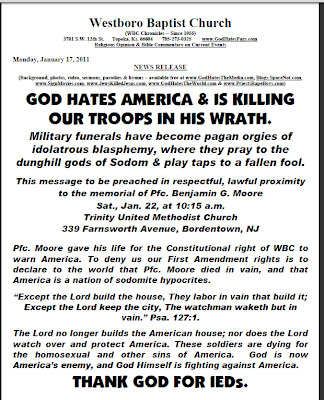 Posted by jeffpickens at 6:43 PM

Thanks for the investigative work. I have a coworker who knew PFC Moore, and will appreciate the update.

My prayers go out to the friends and family. Hopefully the community will rally to effectively protect them from these terrorists.

I wonder which "god" they serve, and how they got so warped. I understand when one person is crazy, but when you can convince a whole "church" to be insane with you...that takes some real brainwashing. I hope the Westboros meet the real God of love soon, before their chaos and mischief makes their souls unreceptive.

@FrogEyes aka MFM: Thank you for your comment. I don't think this is so much a church as a very warped family guided by a very evil patriarch. I would very much like to give these monsters a real "Jersey" welcome, but out of respect for the grieving family this will be a silent, peaceful demonstration on our part.