No room at the inn for the Westboro Baptist Church 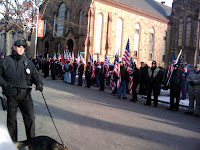 My blood pressure would shoot up off the charts any time I heard about the Westboro Baptist Church (WBC) protesting at a funeral. They started at funerals of soldiers killed in the line of duty, but have now branched out to others, like Elizabeth Edwards and Christina Green (although they were gracious enough to avoid the nine-year-old girl's funeral in exchange for air time on Phoenix and Toronto radio, how nice). I swore that if they ever set foot in New Jersey I would be there.

Unfortunately I got the opportunity, when 23 year old Benjamin Moore of Bordentown, NJ, was killed by an IED in Afghanistan on January 12. The WBC announced they would be there. I decided I would be there too. I learned through a Facebook Group that people were planning on surrounding the area in order to shield the grieving family from the "God Hates Fags" protesters.

When I arrived in Bordentown at around 7:00am, Farnsworth Ave was relatively quiet. I asked a police officer what he knew about the possible appearance of the WBC. He told me there was a designated spot for them and "they would be dealt with accordingly".

I parked my car and joined a small gathering of people at the corner of Farnsworth and Crosswicks St, all there for the same reason. A woman walked by and passed out American flags, provided by an anonymous donor.

Later I walked over to the church where a large crowd had gathered and lined up along Farnsworth: police, firefighters, military, veterans, and civilians. By that time every road surrounding the church had been cordoned off and there was no sign of the WBC people. The people I spoke with mentioned that the WBC had tried to check into some local hotels but were turned away. I also heard that they were at the firehouse. I walked around the area to see if I could find them, but could not. By 10:00 I got back in my car and drove around the surrounding area, past the firehouse, and still saw none of them.

It was apparent by then that the outpouring of support from the community, including people from all over the state, had succeeded in keeping the WBC away. I learned when I got home that the WBC arrived, saw their designated area, didn't like it, and left. They then headed for the cemetery, didn't like their designated area there either, and left for good. Most of us never saw them. I did not get the photo op I had hoped for, but this time I was not at all disappointed.

This time, the Westboro Baptist Church picked the wrong state to mess with. Law enforcement and firefighters from all over the state, veterans and active military, and ordinary folks like me had all played a part in keeping these monsters away. Bordentown's fallen soldier had the dignified send-off he deserved. May he rest in peace.

There were no incidents, other than the swift departure of the Westboro Baptist Church. Good riddance.

Posted by jeffpickens at 3:14 PM

Exactly how it was meant to be! Kudos to Bordentown, and everyone involved! I have never been prouder to me a residentof Bordentown City, and never prouder to put on my service dress and pay the proper respects to my military brother! RIP Ben!

I don't understand why this group has not been arrested as being a terroristic cult? Freedom of speach or not why has the US government not banned them from the country? Other countries have banned them why can't we? Why are these people allowed to profit off a system that they don't support? I just don't understand how the government lets them get away with what they do.