Have You Written to Your Elected Officials Lately? 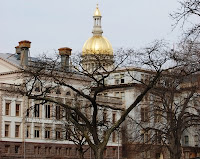 Have You Written to Your Elected Officials Lately? I have.

Recently I wrote to the triumvirate who represent  my Legislative District, #4: Senator Fred Madden (D), Assemblyman Paul Moriarty (D), Assemblyman Domenick DiCicco Jr (R), along with Washington Twp Mayor Matthew Lyons (D). The subject was the growing number of once-thriving, now vacant, retail properties in the Township (which will be a topic for a future blog).

I received two responses: one from Mayor Lyons, who suggested that I attend the next planning meeting . The other was from Assemblyman DiCicco, the sole Republican Legislator in my District, who expressed that he shared my concerns, and included the usual Republican boilerplate about making NJ more business-friendly. I believe he was sincere. I am disappointed by the silence form the two Democrats who represent my District, especially Mr. Moriarty, who is a Township resident and former mayor. At least Mr. DiCicco had the decency to respond. Perhaps he is the only one who realizes that he is up for re-election this year, and re-election is not a given.

I also wrote to the Governors office, one sentence:
"When can we expect the Governor to unveil his 2012 budget proposal?"

Here is the robo-response I received, which included a self-congratulatory link to a YouTube video from the recent Union City town hall:

Dear Friend:
As we continue our push for fiscal sanity, meaningful education reform and a lasting fix to our broken pension and benefits system, we've launched a website to detail the reforms and track our progress.  You can find it here:
http://www.state.nj.us/governor/reformagenda
As we continue to hold open town hall forums up and down the state, I'll do my best to share them with you.  Here's a clip from our latest town hall in Union City last week:
http://www.youtube.com/watch?v=Qg19I46IDuM

That's not what I asked.
I asked:
"When can we expect the Governor to unveil his 2012 budget proposal?"
- JRP

I'll keep you posted.
Posted by jeffpickens at 7:15 PM