The Sound of Silence in Trenton 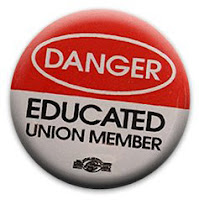 A Republican governor is elected in a traditionally "blue" state on the platform of restoring fiscal sanity. Upon taking office, he declares war on the public unions, including the teachers' union, firefighters, police. He scapegoats public sector workers and attempts to turn public opinion against the state workers, because, after all, their outrageously bloated salaries, benefits, and pensions are to blame for the state's fiscal woes.

Outraged, teachers, police, firefighters, and other public workers storm the State Capital by the tens of thousands, protesting the governor's attempts to balance the state budget on the backs of public sector workers.

The whole world is watching! Why is the Liberal Media not in Trenton covering this?

Because it's not happening in Trenton, it's happening in Madison, WI. Unlike their brothers and sisters in NJ, the state unions in Wisconsin decided not to wait. Perhaps they looked east and saw what happens when you have a governor run amok, storming the state, and now the country, ramrodding his anti middle class agenda and getting fawning coverage by the press while he's at it, and the people do nothing. The story in Wisconsin is fluid and it remains to be seen how this will play out. However, I'm certain there will be no "Scott Walker for President" movements anytime soon.

The people of Wisconsin took a lesson from the complacency in New Jersey and decided to fight back now.

It's time the people of New Jersey take a lesson from Wisconsin.
Posted by jeffpickens at 8:34 AM