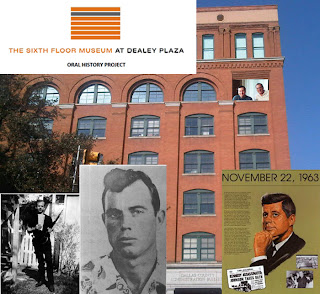 (Update - On Friday, 2/17/2012, Andy and I went to Dallas for our JFK Oral History Project interview. It went very well. Read all about it HERE.)


Some of you know the story - two boyhood pals in suburban New Jersey: While other kids were playing sports, Andy and Jeff were consumed with the JFK assassination. We both vividly remembered where we were on November 22, 1963, and from the time we met in 1967 at age ten through our teenage years and early twenties, we delved into the Crime of the Century - reading books, engaging in deep discussions of conspiracy theories, examining the Zapruder film frame by frame. We vowed to one day visit Dealey Plaza in Dallas. Over the years, we lost touch, but reconnected in 2002. We remembered The Vow, and that neither of us had let go of it.

Then, in 2005, I learned I had to go to Fort Worth for business. By that time, Andy had relocated to Houston. I contacted Andy and the plans were underway. On November 16th, 2005, 11:45 CST, we both arrived at the parking lot of the Sixth Floor Museum - formerly known as the Texas School Book Depository - each clutching our copies of Best Evidence.

We spent the day at Dealey Plaza, covering every inch of the Grassy Knoll, visiting the Sixth Floor Museum, re-enacting the frantic drive from Elm Street to Parkland Hospital, even visiting the grave of unsung 11/22 hero J.D. Tippit.

A while back, I heard about the JFK Oral History Project, which:


explores the history and culture of Dallas and the 1960s, and preserves personal recollections regarding the life and death of President John F. Kennedy. These candid, informal interviews offer insight into the Kennedy legacy and the local—and global—impact of his assassination.

I contacted Andy and we knew we HAD to do this. So, on November 22, 2011, we simultaneously contacted the curator of the Sixth Floor Museum, who found our story compelling enough to invite us to Dallas to be interviewed on video for the Project.

Our interview is scheduled for Friday, February 17th, 2012, at 2:00pm CST. I will fly to Houston the night before, Andy and I will head to Dallas Friday morning, on the ultimate road trip. The journey will be documented on video and in writing. Stay tuned to Pick's Place for updates.

The video of our interview will be archived for viewing on the website or at the Museum itself. We will not only talk about history. We will be part of history.

This will be HUGE.

This will be EPIC.

Posted by jeffpickens at 7:32 AM

Excuse me, but YOU rock. This is indeed epic. Can't wait for the video.

congrats cuz,when i visit my godson in texas in the future i'll go see museum and your interview