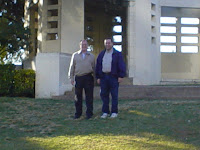 CLICK HERE for an update on the Sixth Floor Summit.

Update: Shortly after this blog was posted, Andy and I were contacted by a representative of the JFK Oral History Project who invited us to Dallas to be interviewed and have our story recorded on video. Details to follow, once arrangements have been finalized.

Anyone old enough to remember can recall where they were on November 22, 1963 when they heard the news that President John F. Kennedy had been shot. Mine is a story of a childhood memory, a lifelong interest, and the reuniting of two boyhood pals.

On November 22, 1963, I was in the second grade at St Francis School in Ridgefield Park, NJ. It was a Friday afternoon. I remember a kid coming into the classroom and handing the teacher a piece of paper. The teacher told us the President had been shot, then made us say a prayer, then sent us home. I went home and my mother was crying. What I remember the most about that day and the next three days was that time stood still for those three days. Everything was closed. No store would dare be open, not in the Irish-Catholic town I lived in.

Meanwhile, in Bridgeport, CT, a few years before moving back to New Jersey , Andrew Kadin was a second grader. Says Andy:

I was 2 months past my seventh birthday and I was home from school sick on Friday, November 22, 1963. I remember lying on the couch in the living room in my pajamas watching some sort of ghost-comedy movie ("Topper"?) when the FlashBulletin screen appeared on the TV.

I vividly remember the announcer saying that shots were fired at the President's motorcade in Dallas but that no one was hurt. The movie returned and in a short time the Flash Bulletin screen was back and now the announcer spoke of people being hit. This went back and forth for a bit until a following bulletin first announced Kennedy was hit, perhaps fatally. The TV coverage was continuous now and next I remember the announcement that JFK had died.

I think my mother phoned my father at work and he may have come home early.

The next few days are fuzzy but I remember my father picking me up from Sunday school. The radio was on. That's when Oswald was shot.

Fast-forward a few years. Andy and I met in 1967 and as youngsters, we both read many books and publications regarding the assassination. We had always promised that one day we would meet up in Dallas to test various theories and to visit specific locations now part of the assassination's history.

Those plans came to fruition on November, 2005. Both of us had plans to be in the Dallas area on business travel, and our long awaited historic summit occurred on November 16th when we met up at the Sixth Floor Museum, then spent the afternoon touring Dealey Plaza and the surrounding area, a boyhood promise fulfilled.

Andy and I have submitted our stories to the JFK Oral History Project, associated with the Sixth Floor Museum in Dallas TX. We hope to be interviewed and recorded and have our story archived for posterity.

Posted by jeffpickens at 8:20 PM

This is a truly amazing tale. It brought a tear to my eye thinking about a couple of 11 year old kids and their boyhood dream to one day make the pilgrimage to Dealy Plaza. That it was 38 years later when you two made it a reality is awe inspiring. You have given me the will to live, the courage to survive. If you can turn your life long dream into reality then so can I. You are my heroes. Bless the both of you.