I heard the news that day, oh boy 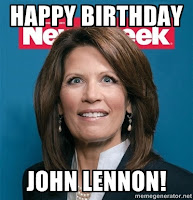 That night, actually. I was 23 years old. It was just after 11:00PM EST, I was watching the news on New York City's NBC channel 4 in my bedroom in New Jersey. Chuck Scarborough was delivering the news when he was handed a bulletin: "We just received some startling news. A man believed to be former Beatle John Lennon has been shot outside Central Park". That was all the details he had. Later in the broadcast he confirmed that the man was indeed John Lennon, and he had died.

I then shut the TV off and tuned my radio to WNEW-FM ("Where rock lives"). DJ Vin Scelsa, his voice shaking,  was riffing on the shocking event that had just happened, lamenting that "the life of a man of peace would end in such a damnable manner". He then cued-up "Watching the Wheels" from John and Yoko's comeback album, "Double Fantasy". I fell asleep listening to the radio.

I cannot say that the death of John Lennon affected me personally, but like many of my generation, for us, the music of The Beatles was the soundtrack to our childhood and coming-of-age. From their arrival in 1964, a welcome antidote after the assassination of John F. Kennedy (another "Where were you?" moment) when I was in 2nd grade, to the break-up in 1970 when I was entering high school, to Lennon's surprise appearance at an Elton John concert in Madison Square Garden on Thanksgiving 1974. I had a third row center seat that night, and it was, of course, one of the highlights of my life as a music fan. It was also the last time Lennon would ever appear on a stage.

It is impossible to say what John Lennon would be doing now if he had lived. I am almost certain, however, that he would have continued to be an outspoken critic of war and an advocate for peace.

Would he have made more music? I hope so.
Posted by jeffpickens at 5:59 AM