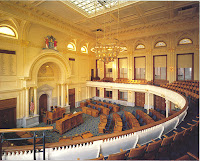 This is the question I get all too often when I talk about the upcoming NJ State Legislature elections on November 8, 2011.

It's not surprising. Most people who bother to vote pay attention to even-numbered years, when we vote for US House, US Senate, and, every four years, US President. It's different here in New Jersey, where state elections are held in odd-numbered years. Our gubernatorial election is the year after the presidential election, which draws some attention.

Unfortunately, the non-gubernatorial odd-numbered year is a black hole of voter awareness in New Jersey.

The NJ State Senate and Assembly candidates who are "walking", knocking on doors, have a two-fold task: They are asking for votes, and more often than not, they must explain what office they are running for, and that the election is this year, not next year.

There are approximately 1.7 million registered Democrats in the state of New Jersey. I wonder how many of them know there is an election here in less than three weeks? How many of them drive past yard signs without notice?

So, mark your calendar, November 8, 2011, and remind your friends that, however entertaining the 2012 Republican freak show my be, 2011 is not an off year in New Jersey. We have an election this year, and we need to vote.
Posted by jeffpickens at 9:14 AM

It's not just the state legislature. County Freeholders are also being elected. These are folks who determine how your tax dollars are spent at the local level. It would be wise to get to know them in order to cast an informed vote.

Thank you, deciminyan. I always wondered what County Freeholders do.