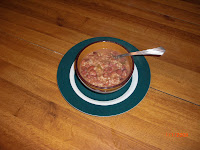 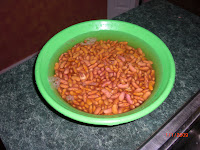 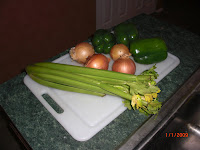 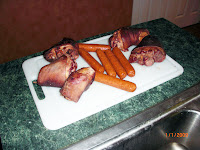 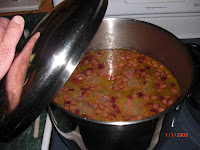 Do you smell that? It's ham hocks, son. Nothing else on the world smells like that. I love the smell of ham hocks in the morning!
It is a New Years Day tradition for me to make Red Beans and Rice. Southern tradition calls for black-eyed peas and some form of pork and greens to bring good luck in the new year. I have nothing against black-eyed peas, but I like red beans better, so that's what I have stuck to for the past few years. Substitute rice for greens and I have my very own tradition.
My recipe is derived from the Prudhomme Family Cookbook and includes red kidney beans, smoked ham hocks, andouille, and what the great Justin Wilson used to call the "holy trinity" - uh-yuh, sell-ray, and green peppah. Until recently, andouille was not easily available in New Jersey, sow in the past I had to substitute kielbasa, but thanks to Emeril and Johnsonville, I can now use the real thing. New Orleans natives may not agree to the validity of Johnsonville andouille as "real", but where I live it will have to do.
It's a fairly simple process, soak the beans overnight, dice and sauté the onion, celery, and peppers. When the vegetables are cooked, combine with diced andouille, beans (drained), and ham hocks. Cover with just enough water and bring to a boil. Lower the heat and simmer, covered, for about two hours. Remove ham hocks, separate the meat from the bones, put the meat back in the pot and continue to simmer, uncovered, stirring often, until the mixture reaches your desired thickness. Serve over rice.
Your kitchen will smell amazing!
http://www.youtube.com/watch?v=bWyf3k-2oI
What are your New Years Day food traditions?

Yum! We make a similar receipe with our left-over Christmas ham and ham-hocks. (I won't look at those, just made the boyfriend deal with that.) It's delicious, and now we have enough bean soup frozen to last several months.