I found out about "National Papa John's Appreciation Day" through Facebook. A movement of over 21,000 people were planning to go to Papa John's to show their support for owner John Schnatter's threat to hike the price of his shitty pizza to pay for Obamacare.

Papa Johns has been targeted by the left for a boycott, for simply articulating that ObamaCare would hurt profits and force cutbacks in employee hours. Stand up to this nonsensical and illogical action and support Papa Johns this Friday!

The CEO of Papa John's, John H. Schnatter, has said that he will have to cut employee hours because of Obamacare. Schattner has received intense media scrutiny in addition to being demonized as an evil rich guy by the Left. Obamacare is a fiscal nightmare and because of it, many small businesses aren't hiring now. Some are even closing their doors. Obamacare is now, as John Boehner said, "the law of the land."

In solidarity with John H. Schnatter, we propose that November, 16th, 2012 be National Papa John's Appreciation Day. The Left thinks we are discouraged; they think they have won. Let's send a clear message this Friday, like we did on Chick-Fil-A Appreciation Day, that we are here to stay and that we won't stop fighting. There are over 2,600 Papa John's stores in the United States. Let's flood all of them like we flooded Chick-Fil-A.

There are a couple of Papa John's near where I work, in Cherry Hill, NJ. I decided to take a ride at lunchtime and check them out, in the hopes of finding, photographing, and interviewing on video people who would do something like this.

Imagine my disappointment when I got to the Papa John's in Pennsauken, and saw this: 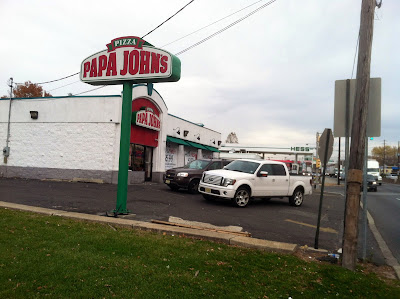 And when I got to the Papa John's in Maple Shade, and saw this: 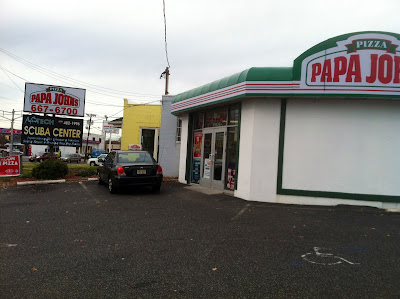 Posted by jeffpickens at 8:13 PM