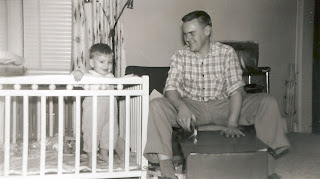 In the photo, Harold Pickens, newly-minted Jersey Guy, transplanted from Cincinnati, OH, gazes lovingly at his young son (can you blame him?), while the little boy, safely enclosed behind the bars of his play pen, thinks, "some day I want to be like him".

On a side note, Mom was a much better photographer than she was ever given credit for, usually ceding that job to Dad. But the photos of me and Dad from the old days are gems.

Dad is holding what appears to be a staple gun, fixing something, as he often did. He fixed everything. When the TV broke, we didn't buy a new one. Dad would take the back off the TV, remove all the tubes, and we would go to the hardware store and test each tube in the tube tester. Once he identified the bad tube(s), he would buy news one(s), put all the tubes back in the TV, and it was fixed.

An aircraft mechanic by trade, Dad fixed the cars, and tried, with moderate success, to teach me how to do the same. I was not that good at it but at least I understand (kind of) how an internal combustion engine works, and was able to do basic repairs, and today I can speak to a mechanic with some degree of knowledge and not get ripped off.

I never really fully picked up Dad's penchant for DIY-ing; I am basically useless in that regard. About five years ago Dad called me to help him install a garage door opener in his house.

So I went over and we got to work, me on the ladder and Dad handing me the hardware and giving instructions. It went well until we hit a spot in the garage ceiling where there was no stud. Dad said, "looks like we need a molly", and went over to his tool box to get a molly screw and handed it to me.

I held the molly; clueless.

And so, at the ripe old age of 49, I learned how to use a molly screw. It was the first and last time. I know better than to try it myself at home.

Dad fixed everything. He picked me up whenever I fell, as he did for Mom, and my brother and sister. He is the most selfless person on the planet; the real deal when it comes to family values. It will take a lifetime to repay him for all he's done for me and my family. 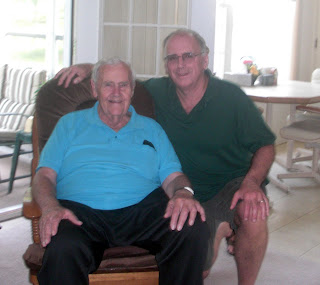 Posted by jeffpickens at 7:31 AM