Jackie Robinson's Autograph - Not For Sale 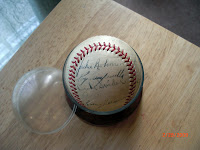 This story originally appeared in 2009 on CNN iReport, in response to the question, would you sell any of your prized possessions to pick up some extra cash in this bad economy.

The years 1956 and 1957 were a one-two punch for my poor mother - in December 1956, she gave birth to me, and in October 1957, her beloved Brooklyn Dodgers announced they were moving to the West Coast. A bit too much trauma for one person to have to endure over one ten-month period!

The Dodgers' move to L.A. was one of those events, like the Depression and World War 2, that the adults in our house talked about so much I sometimes thought I actually remembered it. Mom was a rabid Dodgers fan, and refused, until her last day on earth, to watch any baseball, as long as the Dodgers are not in Brooklyn.

One of her prized possessions is an official Ford Frick National League baseball, autographed by the Brooklyn Dodgers. I am not sure of the exact year (1954/55?), but I know Mom got the ball thanks to an acquaintance of my grandfather, a sportswriter for the local paper picked it up at spring training.

The ball has the autographs of many Hall-of-Famers, giants and legends of the Brooklyn Bums, including:

- Gil Hodges, who went on to manage the 1969 Miracle Mets to World Series victory, and, in one of the most egregious miscarriages of justice in sports history, is not in the Hall of Fame

- Roy Campanella, who was tragically paralyzed in an auto accident in 1958

And of course, Jack Roosevelt Robinson, the first African American to play in the major leagues, and whose number, 42, is retired forever.

Jackie Robinson! This guy used to steal home! Who does that today?

The autographs are starting to fade. The ball belongs to my family, and I am currently the custodian, keeping it in the dark in an undisclosed location, taking it out occasionally to show anyone who may want to see it.

I'm not sure what this ball is worth in the sports memorabilia market, but I'm not selling it.
Posted by jeffpickens at 7:23 AM