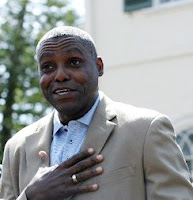 They certainly matter to NJ Governor Chris Christie, who took a special interest in the election for State Senate in the 8th Legislative District, in which Olympic Gold Medalist and Willingboro native Carl Lewis had plans to run as a Democrat.

Now, it is hardly breaking news that the Governor is a petty, vindictive bully. By the time Lewis formally announced his candidacy on April 11, calling Christie a "good friend", Christie's plan to derail Lewis' candidacy was well underway, and the fate of the campaign had been all but sealed.

According to the Philadelphia Inquirer, Christie sent one of his young thugs after Lewis, in a series of "increasingly tense phone calls", marked by attempted intimidation and implied threats:

(H)e received the first of increasingly tense phone calls from Frank Luna, a veteran political operative who performs constituent services for the governor.

Luna asked Walker, executive director of the Carl Lewis Foundation, whether Lewis was running for the Eighth District Senate seat. According to Walker, Luna told him: "The governor is concerned."

The two spoke daily the next two days, and on April 9, Walker said, Luna told him "the governor is very upset and disappointed, and Carl would be embarrassing himself by running."

Walker said that in that April 9 conversation, Luna told him, "How can you expect the governor to work hand-in-hand with Carl when Carl is working against him? You can forget about this program."

Christie knew that, should Lewis decide to declare anyway, the Republicans would challenge Lewis' NJ residency in court, and if the court punted, he could count on Lt Governor / Secretary of State Kim Guadagno to pull a Katherine Harris and rule against Lewis,

We get the government we deserve. For those Democrats who were disappointed with the Corzine campaign and decided to stay home in November 2009, or worse, voted for Christie thinking "how bad can he be?", consider this: It could have been Loretta Weinberg making the decision on Carl Lewis' eligibility to run in NJ.While we cannot know for sure how a Secretary of State Weinberg would have ruled, we can be reasonably sure that, stateswoman that she is, she would have given careful consideration to the facts of the case and ruled as Secretary of State, not as the Governor's sock puppet.

To paraphrase Bill Clinton: if you don't vote, you are, in fact, voting for the person you don't want. Let's not let that happen again.

Get out and vote today if your school district is holding elections today.

Get out and vote in November. We need a Democratic majority in the Legislature to hold this out-of-control Governor in check.

Posted by jeffpickens at 8:11 AM