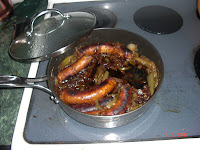 This year's garden has been a mixed bag - great crop of cucumbers and zucchini early in the season, some good cherry tomatoes, and some not so good regular and plum tomatoes. I think that something's getting at the tomatoes (squirrels? birds?) just as they turn red and before I can pick them.

One pleasant surprise, however, have been the green peppers. I have tried every year to grow green peppers, but have never been successful until this year. I have had lots of them, all edible and delicious.

This morning I picked a bunch, and discovered we had some Italian sausage in the freezer, so I decided to bring some of the Jersey Shore boardwalk into my house and make sausage and peppers for lunch.

Cook the sausages first in a skillet. Get them good and brown on each side and try not to burn them. Then turn the heat way low, cover, and cook for about 5-10 minutes on each side until they're cooked through.

Take the sausages out of the skillet and set aside.

Slice the green peppers (and onion if you want) long-ways. Cook in the same skillet, in the sausage fat, at high heat, tossing often to prevent burning. Cook until soft.

Return the sausages to the skillet and mix thoroughly with the peppers and onions. Cover and let sit until ready to eat.

Best served on a good Italian roll.
Posted by jeffpickens at 3:48 PM