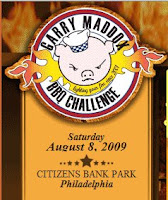 Saturday, August 8, is the second Big Event of the summer for me. Now that the American Cancer Society Bike-a-thon is over, I can now focus on the Garry Maddox BBQ Challenge, at Citizens Bank Park in Philadelphia.

THANK YOU to everyone who donated to my Bike-a-thon ride. The event was a huge fundraising success, and there is still time to donate if you're interested.

Last year, I competed for the first time, and did not win, probably because I was a rank amateur in the sport of competitive BBQ. This year I am still a rank amateur but just a bit less rank, thanks to lessons learned in last year's competition and in my experience as a judge at a BBQ event at the Keansburg, NJ Fire Company this past May. Thank you, Bill E., for that privilege!

I will be entering in all four categories:

I'll be there from 6:30am to get set up and get my fires started.

If you're in the area, please stop by and say hello, and wish me luck!
Posted by jeffpickens at 8:57 AM