Why Do I Find Bratty Kids So Amusing? 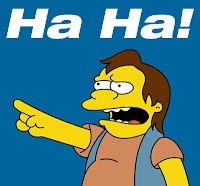 I was at the ATM machine this morning, in the bank lobby. There was a woman with a young bou, about three years old. He kept screaming that he wanted a lollipop. His mom kept saying "no", and with each "no", the kid threw himself on the floor, while his mom grabbed his wrist and tried to pull him back up to a standing position. The tantrums got so bad the mom pulled the kid outside the lobby to try to get him to calm down.

For some reason, I found this hilarious. I guess it's funny when it's someone else being embarrassed by a bratty kid.

When I was done, they went back into the ATM lobby, with the kid still screaming for a lollipop. I would bet anything that she eventually took him into the bank and got him a lollipop, which she probably should have just done in the first place.
Posted by jeffpickens at 11:32 AM