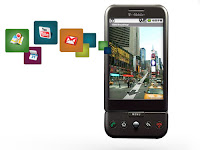 WASHINGTON TWP, NJ - Local resident Jeff Pickens is now the proud owner of a T-Mobile G1 Android 3G Smartphone, and can't stop telling everyone how great it is. Pickens, 52, suddenly found himself in the market for a new phone this past weekend when his other phone suddenly ceased operating.

After a fight with the asshole at the Clementon, NJ T-Mobile store after the asshole made no attempt to determine what was wrong with the old phone, Pickens, consumed with rage, expelled a string of expletives and walked out of the store. "The guy was such an asshole, I had to get out of there before I did something violent", recalled Pickens, visibly shaken.

Pickens then decided to try another T-Mobile store. "The guy at the Deptford Mall store, Mike, was the exact opposite of the asshole at Clementon", he said. "I really intended to get just a regular phone, but when Mike showed me the G1, and some of the cool things you can do with it, I had to have it. Mike was a great salesman".

Now, Pickens has been singing the praises of the G1 to anyone who will listen, much to the annoyance and embarrassment of his family and friends. "One of the coolest features is 'My Location' on the Maps feature", he gushed. "It shows you exactly where you are by putting a blue dot at your exact location, with mind-blowing accuracy".

"He showed me the map thing" said a family member, who only spoke on condition of anonymity. "He showed me the blue dot, in one room of the house. Then he made me walk over to another room. the dot moved over to the exact spot in the house where we went. I think that's just plain creepy".

Pickens is still exploring the vast array of functionalities and applications available with the G1.

He has yet to make an actual phone call with it.
Posted by jeffpickens at 5:38 PM

Hello Jeff
I was seriously thinking about getting an iphone because I heard it had user friendly capabilities to upload videos to Youtube. I haven't thoroughly explored the market yet.

Arlene - I chose the G1 over the iPhone because I didn't want to sign up for ATT service when I already have T-Mobile service. Not sure if it can upload vids to YouTube directly form the phone but I haven't even scratched the surface in checking out all this phone can do.

jeff, funny! Isn't it great that we are uncensored here and on wordpress?
Have phun wit yer phone!

Rose - I had thought about posting this on iReport, but it would have required a thorough verbal scrubbing. This post was just goofing on myself and not really newsworthy.