Worth Repeating - Chris Matthews on the GOP Obama Haters 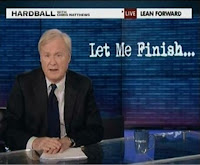 Too lazy to write my own blog today, so here is the transcript from the Let Me Finish" segment of Hardball. Chris Matthews can sometimes be obnoxious and buffoonish, but when he is good, he is very very good, as he is here, calling out Mike Huckabee and his ilk for their attacks on the President and not-so-subtle appeals to the racist, right-wing base:

“Let Me Finish” tonight with this horrible talk we‘re hearing in this country.  I was out last night in California, Los Angeles, with a large of former Peace Corps volunteers like me.  We were at UCLA talking about the Corps‘ 50th anniversary this week, ever since John F.  Kennedy decided it was a good idea to get young Americans out there in the world, helping countries develop, sharing some of our American “can do” spirit, and in the process, learning something about how the rest of the world looks at things.


It came to me that everything good about that is being assaulted these days.  This guy, Huckabee, and Gingrich and W. before him were out there trashing the whole idea of learning anything from about world, anything from the rest of the world.  This whole stupidization of things that began with Bush‘s inane attempt to rename French fries.

Now, this guy, Huckabee, is going around the right wing radio world singing the song that our president isn‘t really one of us, because his father, who stayed with him until the age of 2 infected him with some kind of foreignness.  You know, he‘s a Kenyan, he‘s a secret Muslim, he‘s over there where those African people, where those different people live.

I thought we were beyond this yahoo talk, this fear of the world, this monkey trial nonsense.  But we‘re not, are we?  We‘ve got knuckleheads promenading around the right wing radio belt playing to the God knows who crowd saying how Obama was somehow involved with the Mau Maus, hanging around madrassa schools—all the while that this young kid way back then trying to make it in this country.

And all he did, everything he did was right as a regular American kid, playing basketball on a championship team in Hawaii.  That‘s what I wanted to do growing up, be a championship basketball player.  He went to Catholic school, like I did.  He got into Occidental College in California, then to Columbia University.  And then he went to Ivy League and with the Harvard Law where he made that law review.
What more do you want his kid to do?  He‘s done everything right.

Look at his marriage.  Michelle has done everything right.  Her brother is a top basketball coach out of Oregon State.  Their kids look like they‘re right out of a picture book.  This isn‘t just the American Dream, it‘s done (ph) near perfect.

And what is this right wing goon squad doing?  They keep talking about his father, his grandfather.  What about his grandfather who fought under Patton in World War II?  What do these people are looking for?  Some evidence that he‘s black?  Is that it?

They ought to be ashamed of themselves.  You know what‘s un-America?
Huckabee and Newt and the rest of them—this stuff is.

That‘s HARDBALL for now.  Thanks for being with us.

Visit msnbc.com for breaking news, world news, and news about the economy
Posted by jeffpickens at 2:29 PM