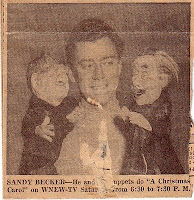 In today's digital age, where everything that is written, photographed, and otherwise recorded, is forever. If it's on the internet, you can find it. It's hard to believe that this was not always the case.

We are talking, in particular, about the kids' TV shows of the early 1960's, hosted by such giants and legends of broadcasting as Chuck McCann, Sonny Fox, Soupy Sales, and most of all, Sandy Becker.

Sandy Becker hosted a daily kids show, broadcast live on WNEW-TV, Channel 5. Any fifty-something Boomer who grew up in the greater NYC area in the 1960's watching TV, remembers being entertained by Sandy Becker, and his cohort of characters and puppets. These shows were broadcast live, recorded on kinescope (the pre-cursor to videotape), saved for a short time, then erased and taped over for the next show.

This includes Sandy Becker's 1961 rendition of "A Christmas Carol", starring his ensemble of puppets, including Geeba Geeba as Scrooge, and Sir Clive Clyde as Bob Cratchit. Anyone hoping to get their hands on a video of this original show is out of luck.

However, New York City based Craig Marin, of Flexitoon puppet studio, has a plan. Marin was a friend and protege of Sandy Becker and inherited Becker's puppets when he died in 1996. "Sandy was a mentor, and we often talked about and planned to remake his Christmas Carol," says Marin, who began his career as a puppeteer and ventriloquist as a teenager. "But sadly, when he passed away, plans were put on old. However, now is the chance to realize Sandy's dream for Boomers and beyond. Our vision is to produce a re-imagining of Sandy Becker’s Christmas Carol, using all the original puppets!"

This will be a 21st Century rendition of the classic show, using the original puppets, new sets, high-def cinematography, and state of the art special effects and editing. In order to finance this project, Craig and Flexitoon, with the assistance of Jeff Pickens (disclosure: the author is a collaborator on this project), have launched a project on Kickstarter, an all-or-nothing funding platform for artists who seek backing for their projects. Potential backers pledge a dollar amount, and with the pledges come premiums, the higher the pledge, the sweeter the premium. No money changes hands until the project is fully funded by pledges.

To learn more about this project, please go to the Kickstarter project page at http://bit.ly/c3HeYf. Read the project description, and the updates, for everything you need to know about this exciting project.

For those of us who remember this program, this was tantamount to a kids' version of Woodstock. With the 50th anniversary approaching, this DVD would make a wonderful gift, an instant Holiday classic you can enjoy with your kids, grandkids, and generations to come!


Geeba Geeba sez: BECOME A BECKER BACKER!
You can help make this happen by becoming a Becker Backer and making a pledge on the Kickstarter site. 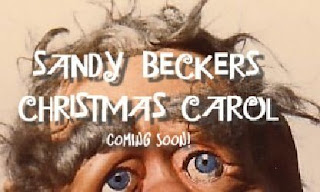 Posted by jeffpickens at 7:28 PM