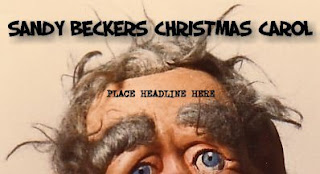 The Project:
On Saturday night, December 23, 1961, SANDY BECKER, the popular and unique host of the top-rated children’s program on WNEW-TV in the New York City/Tri-State area, presented his vision of Charles Dickens’ “A CHRISTMAS CAROL”.  The program starred Sandy's entire ensemble of puppets - - most memorably Geeba Geeba as Scrooge, Sir Clive as Bob Cratchit, and Marvin Mouse as Tiny Tim.  Millions of Baby Boomers who grew up with Sandy as a vital member of their "TV-family" were introduced to Dickens ghostly tale of redemption through this production, and harbor fond and tangible memories of it - - wishing they could view it once more.
Unfortunately, as was the case with many live programs of the time, the tapes - - to the best of our knowledge - - were destroyed or erased or taped-over, lost to the ether, never to be seen again.
However, the torch has been passed and we have the next best thing!
FLEXITOON, one of the premier puppet production companies in the USA on television, film and stage, was bequeathed the puppets, and mountains of memorabilia, by Sandy Becker himself.  Flexitoon partner Craig Marin - - who as a child was greatly influenced by Sandy - - also became his very good friend. "Sandy was a mentor, and we often talked about and planned to remake his Christmas Carol," says Craig.  "But sadly, when he passed away, plans were put on hold."  Now, through the Internet's power to connect everyone, the Holiday special is back on track.  "Our vision is to produce a re-imagining of Sandy Becker’s Christmas Carol, using all the original puppets!"  Flexitoon will make new costumes, sets, and music, and apply  21st Century production techniques, allowing us to "keep the spirit of the original intact, and simultaneously connect to a modern audience."  This one-of-a-kind take on A Christmas Classic will appeal not only to nostalgic Boomers, but to all ages as well.  "Also," Craig adds, "this will be a COMMEMORATIVE DVD in advance of the 50th Anniversary of the original presentation."


Networking:
Once this project has been placed into the Kickstarter platform, collaborators Craig Marin and Jeff Pickens plan to seek backing by reaching out to our diverse professional and social networks, as well as family and friends. With Craig’s background in creating award-winning puppets and productions in all media, and Jeff’s background in finance and project management, we see this project as a winner, and expect to touch a nostalgic nerve with enough backers to make it happen. The program will be produced direct-to-DVD, for sale to the public via the Internet, nostalgia conventions, and direct marketing.  Theoretically if we can get 300 people to pledge $100 each we have our goal of $30k. Of course some will pledge more, and some less, but considering our network we can reach out to enough people to attract the backers.
The Collaborators:

Craig Marin
Craig Marin has a lifetime of experience in the field of puppetry. A native of New York City, Craig grew up enamored with the puppets he saw on television, eventually apprenticing for the great Chuck McCann on WPIX. Soon he was appearing on all the local children's programs - - including "The Sandy Becker Show" - -with his unique spin on puppets. After high school he formed the Marko Puppet Theatre and toured colleges throughout the United States with a highly original concept that was just right for the times -- a psychedelic puppet show. The show garnered such an underground reputation, that Marko was asked to perform for the Grateful Dead at Jerry Garcia's birthday party (!). Coming east to New England, Marin began a children's theater that for five years toured schools and theaters. Craig accepted a job with Bil Baird's Marionettes, and it was here that he met his partner and future wife, Olga Felgemacher. Together they created FLEXITOON, a company that for thirty years has specialized in television, film and stage, creating and performing award-wining puppets, marionettes, and programming for Nickelodeon ("Pinwheel"), PBS ("Shining Time Station"), FOX ("DJ Kat Show") and Showtime ("KIDS-TV").  Their "Talking Stain" for TIDE was voted the # 1 Funniest Office Commercial in the World, and the #3 Super Bowl commercial of all time.
Jeff Pickens
Jeff is Manager of Internal Controls for a Fortune 100 company. He has over 30 years experience in accounting control, financial management, risk management, planning and budgeting, cost control and project management. As well as being a life-long TV, film, and theater enthusiast, Jeff’s hobbies include cooking, vegetable gardening, photography, videography, and blogging. His YouTube videos on a variety of subjects (travel, gardening, backyard barbecuing) have been enjoyed by thousands of viewers from all continents. His photos, videos, and writing have been frequently published on CNN.com iReport.  A native of Jersey City, NJ, Jeff currently resides in Gloucester County, NJ.
Posted by jeffpickens at 7:31 PM